Messages of Hope is the first documentary film produced and recorded by Dr. Charley Ferrer, Founder of Cancer Tamer. It debuted along side the play, Breast Cancer Diaries which premiere on October 5 in Staten Island to a sold-out audience of 150, with an additional sold-out encore performance of 100 participants on October 22 in Manhattan.

Messages of Hope includes comments from women and men diagnosed with breast cancer, sharing their fears, their struggles, and their hope for the future; as well as their Message of Hope for others affected by breast cancer.

A big shout out and “Thanks” to all our sponsors who supported us on this endeavor and to all the woman and men who participated in the interviews for this film, especially members and participants at the Male Breast Cancer Coalition Conference 2019.

Dr. Charley Ferrer is a world-renowned Clinical Sexologist & Sex Therapist. She is the award-winning author of several books on relationships, sexuality, self-empowerment and breast cancer. She was diagnosed with breast cancer 2016 and thyroid cancer in 2017. Frustrated with the lack of information and treatment options provided to cancer patients, Dr. Charley created the Cancer Tamer Foundation which focuses on education and empowerment. In 2019, she wrote the play, Breast Cancer Diaries which premiered to a sold out crowd on Staten Island & Manhattan along with two documentary files: Messages of Hope and Faces of Breast Cancer. Her philosophy on breast cancer is realizing that cancer is not an “outside force” invading but an “inside force” residing. “It’s in our blood, our breasts, our DNA. In our attempts to destroy it, we are inadvertently destroying ourselves.” she states. Dr. Charley’s revolutionary new way of thinking about cancer is turning heads, creating controversy, and reminding women and men that we should not be at war with our body! Check out her new book, Breast Cancer: From Diagnosis to Surgery.

Breast Cancer Diaries – The Play was made possible (in part) by a DCA Premier Grant from Staten Island Arts, with public funding from the New York City Department of Cultural Affairs. 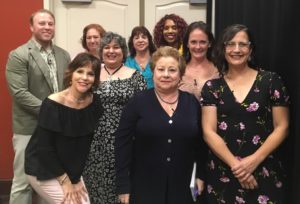